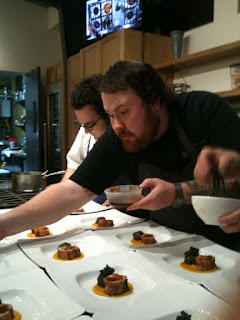 “Service please.”
Sixteen plates of wood-oven roasted Kurobuta pork, each garnished beautifully, piping hot, and that’s what Top Chef Kevin Gillespie utters in a voice just above a whisper.
He was so calm it gave me goosebumps.
I looked across the table at local restaurateur Mark Stark, no slouch on the line himself, and he was also impressed.
Zero indication of any stress, no pressure cooker about to lose its lid, simply alerting the wait staff respectfully that it was time to serve.
I can’t fathom the tension competing on Top Chef. I’ll never know what it’s like to run a restaurant kitchen. But I can appreciate grace under fire.
Last night a small group gathered at Relish Culinary School in Healdsburg for a seven course meal prepared by Kevin and his fellow season six cheftestant, Eli Kirshtein.
We began with radishes and butter, slurped on oysters with beet foam, nibbled on octopus, gobbled sous-vide duck with seared foie gras, but it was the fifth course, the Kurobuta, that rendered the room silent.
I can usually tell when folks are enjoying their food. They either hum or shut up. This was the latter, though I did look under the table and a few folks were crinkling their toes, another sure sign of culinary delight.
Our dessert was Walnut Panna Cotta created by Kendall-Jackson chef Ryan Pollnow. Although he was hesitant to accept any credit, Eli was gracious, “Chef, this is your dessert. Tell me how you’d like me to plate it.”
It paired beautifully with the Murphy-Goode Late Harvest Zinfandel ‘Box Cars’ which according to winemaker David Ready was given that name, “Because it has so much alcohol even a hobo would like it.”
Goode times. Goode times…