To Infinity And Beyond! 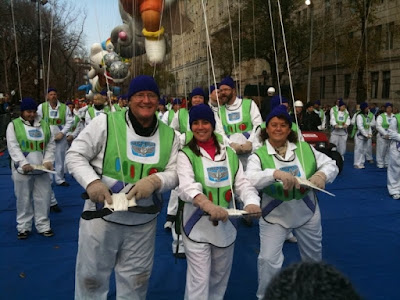 My pal John Lasseter (pictured left) invited me to be a balloon handler for Buzz Lightyear in the Macy’s Thanksgiving Day Parade.

Pixar sponsors the Buzz Lightyear balloon and they are entitled to provide twenty of the fifty handlers.
The festivities began the night before the parade. 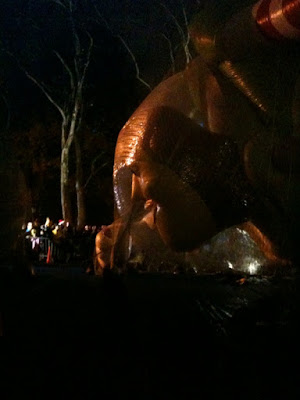 Pixar artist and Buzz balloon designer Roger Gould grew up on W77th street. He’s watched the balloons being inflated on Thanksgiving eve outside his family’s apartment for over forty years. It’s such an important tradition his family hosts a “Blow Up” party annually, as does many of the neighbors. If you have an invitation that will get you past the police barricades at Central Park West and W77th or W81st, you can watch the lifeless balloons as they are being filled with helium and preview the entire line-up.

After noshing on Carnegie Deli’s pastrami sandwiches, homemade chopped liver and gluten-free cupcakes, we called it a night as we had a 4:30A wake-up the next morning. 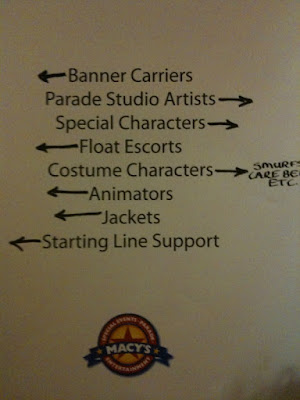 On Thanksgiving day we arrived at the New Yorker hotel at 5:30A and joined the rest of our group. A long line wrapped outside the building and down two blocks. We made our way into the lobby at 7:30A. Once inside, the organization was impeccable.

After putting on our Space Ranger costumes, we made our way to the bus. Ten minutes later we were dropped off at W81st street where Buzz waited, inflated, and under a giant net.

We checked in with one of the captains and we were introduced to our pilot. He doesn’t fly in the balloon, but he is he’s responsible for navigating it safely around the buildings, skyscrapers, light posts, landmarks, billboards and people. Fifty strangers, all novices, and fifteen minutes to lay out the ground rules.

We were taught hand signals for start, stop and slow down. We learned about raising and lowering the balloon with our “bones,” the dog bone shaped handle that holds the ropes attached to Buzz. 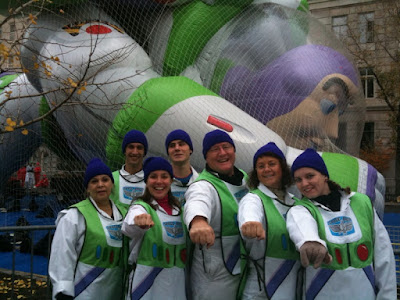 We were warned to never stop at an intersection because the cross winds could be dangerous.

Talk about team work. This was pretty serious.

Buzz Lightyear is formidable. He’s 67 feet long, 39 feet wide and 34 feet tall. His helmet is 17 feet in diameter. As Buzz ascended into the air, I could really feel the tug on my line. Several times along the parade route I had to use all my strength to maintain the rope tension and not let go. Turns are tricky. If you are on the outside of the turn, you have to run to keep up because you have farther to go. We raised and lowered our ropes many times depending on the city scape around us.

The biggest blast about carrying Buzz was seeing all the people.

Two and a half miles flew by in a nanosecond.

Our last chore was to deflate Buzz. All the helium was released and he slowly collapsed in a giant heap. After we rolled him up and put him in his storage hamper, all the Space Rangers were dismissed.

I am awaiting my next Mission.

Lift off is Thanksgiving day 2010.